I used to lie awake at night wondering "How does such a bad player maintain a 56% win ratio and be awarded 7 trophies in 11 months?"

Part one: The method

It all began to make sense to me after playing a game and filing this report https://epicmafia.com/report/200545

During the game (VDLI), both PRs allowed Gerry (mafia) to claim their role and hammer with no repercussions two days in a row for no apparent reason, giving the mafia a free win.

None of the other players reported anyone even though it was clear that both PRs gamethrew.

These three elements summarise the keys to Gerry's success.

Unsurprisingly, the PRs of the aforementioned game are both accounts owned by Gerry's friends. One is owned by Elise, a player with over 42000 profile views on one account and known to be friends with Gerry. The other is named after Gerry and uses one of his previous avatars.

The first key is that Gerry's friends play towards his win condition, not their own. This is a screenshot of Gerry's epicmafia family, annotated with information that ties the listed players to the moderator team. All of the labelled players have been able to decide the verdicts of reports. This shows that Gerry can likely influence which players become moderators.

The second key is that Gerry can manipulate the moderator team easily.

For some time, these two keys would be enough, but eventually questions would be asked. However, Gerry has maintained this control over the website for years. That's where the final piece comes into play. Not only does Gerry have direct control over the group of friends that he plays with and the moderator team, but he also has a more subtle control over the majority of the rest of the playerbase. Most players don't dare to file reports that would be a problem for him, or feel that it will be a waste of time because of the second key.

The third key is the control over the general playerbase. Now that Gerry's underhanded method has been revealed, the legitimacy of his trophies and win ratio comes into question.

In the order that they are listed on his profiles, the following comments can be made about the rounds that Gerry trophied in: This is a screenshot of the top of the list of players that Gerry played with during this round. Of the 7 players listed (Burgers and Lumos are the same person), 3 are members of Gerry's family, and one (Burgers) has been friends with Gerry for a long time.

Also, Burgers had a disproportionate number of games with Gerry this round.

The player that Gerry played with most here was PonyLove, a member of Gerry's family and also a moderator. Here are PonyLove's games for this round.

Additionally, Ripple and SheepPotato (both Gerry's mentees) played a total of 15 games with Gerry (incomplete games included), from which Gerry picked up 9 wins and 1 loss. The player that Ripple played with the most was Gerry.

4 of the players here are members of Gerry's family, and the other is a moderator.

This is a link to MrsWiggles' profile - https://epicmafia.com/user/527946#/ - The round ended 10 months ago (as this is being written), which is the exact time that MrsWiggles stopped playing. They have 4000 points. It looks like they came out of nowhere at the start of the round and disappeared straight after, once Gerry had won.

Screenshot of Lumos' games from this round:

Note is one of Gerry's alts.

This is the top of the list of the players that Gerry played with. RinLin9 and Mori are both members of Gerry's family. Stiffy became a moderator after this thread was published.

RinLin9 has a disproportionate number of games with Gerry: 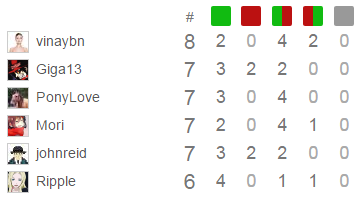 NB: Ripple had at least 11 games with Gerry this round, counting alts.

Vinaybn is, like MrsWiggles, another user that no one's ever heard of that disappeared as soon as Gerry won the round that they played with him in, in this case, 8 months ago.

PonyLove, Johnreid, and Mori are all members of Gerry's family.

Ripple is an ex-member of Gerry's family, and currently one of Gerry's mentees.

Lazy is one of Gerry's alts.

SheepPotato and Himiko are both Gerry's mentees.

PonyLove and Maldito (JeffreyAaron) are members of Gerry's family. JeffreyAaron played an additional 9 games with Gerry on his alts, as you can see further down on the list, totalling 19 games overall.

The fifth player on this list, Infinity, is an alt of one of Gerry's friends, the account is "in love with" Note.

GundamTanaka is one of Gerry's alts. 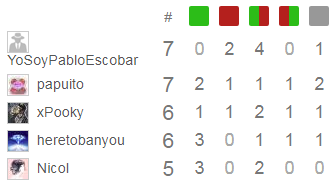 MoriJul 16, 2018
+3
The illuminati picture still makes me crack up like the first day

GerryAug 11, 2018
+2
Last 2 rounds have trophy winners that are part of my Illuminati circle (Giga13 and Mori)

GrungeAug 12, 2018
this is beyond my time but i wanted to pop in to make a gerrymandering joke