Scenarios have occured that, together, clearly demonstrate that the moderator team is severely racist.

I use the n-word in the context "[name] called me a n-----". I receive a hateful comments violation for using the n-word in my sentence. This was despite my use of the word clearly not being in a hateful context.

A user uses a racist slur proportional to the n-word, but against another race, twice. They do use it in a hateful context. They receive no violation.

Later in this thread: 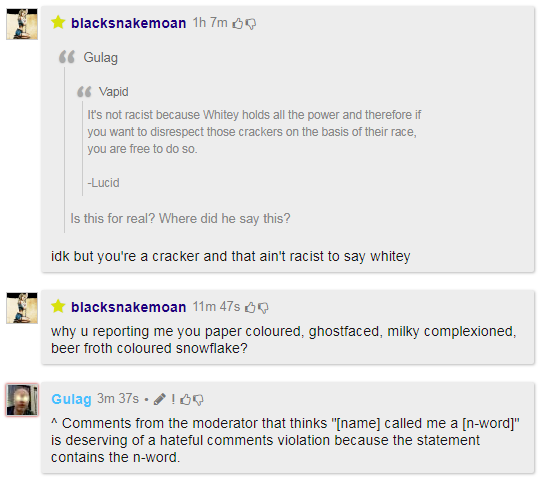 The second comment in the screenshot refers to the following report which charley gave a no-vio to, of course with no explanation (moderators protect their own)

BSM continued to use racial slurs against me despite the other reports, and did not receive a vio. Evidently, being racist against the right people (especially when you're a moderator) makes you immune to the harassment vio as well:

Every report listed was appealed, meaning multiple moderators have condoned this behaviour, and the behaviour was by another moderator

Throughout this thread, BSM has defended his multiple racist posts by saying that he is white. He states it is not possible to be racist against white people if you are white. Supposedly, this is what makes his actions appropriate.

Spiritualized, a black, posted "the whites can't handle being called crackers (sorry crackers)". They unequivocally used racist language in a hateful manner. They received a no-vio verdict. This was despite the only purported reason that BSM was not reprimanded not applying here.

Then they posted more racist comments, but received another no-vio verdict

The moderators give people vios for even mentioning the n-word. However, they encourage the use of racial slurs against white people. The moderators are perpetuating black privilege and are attempting to engage in a sitewide white genocide.

Gulag1mon 4d
It's weird behaviour. I think some people are too afraid to admit that they're wrong so have to spend years digging themselves deeper into the hole. Crazy how certain people can't examine the ideas or biases they picked up from external sources. Hopefully the next generation is wiser.

HappyCat1mon 4d
Yep, I reported someone for using a racial slur, but it was no vioed because "it isn't considered that". Like, the . Equality my .

Gulag28d 3m
The mods are usually really stupid, unfortunately this is an inevitability because only a really stupid person would handle epicmafia reports for free. No offense mods.

turquoise27d 12h
+10
never forget the classic report that spawned the phrase: "In the context it was used in, against me, it was meant hatefully. It is language used against a specific race. Therefore it was undeniably HC. But you don't care."

Gulag14d 23h
Moderators give vios for harassment if one person repeatedly antagonises another. But if the antagonising takes the form of anti-white racism, it is deemed acceptable Gulag8d 23h
This is false