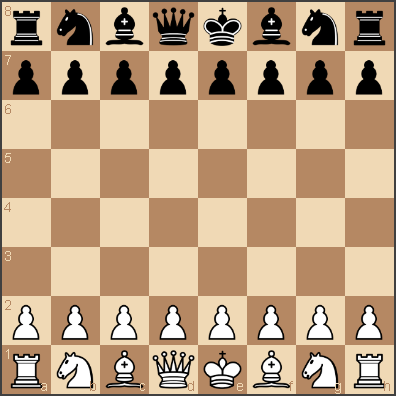 Chess is a turn-based game in which the goal is to put the opposing king in checkmate. White always gets the first move.

Player start with 1 King, 1 Queen, 2 Knights, 2 Rooks, 2 Bishops, and 8 Pawns arranged in the above manner.

King: The most important piece in chess. If a player in in position to capture their opponent's king, they win the game. The king can move one space in any direction (diagonally, horizontally, or vertically).

Queen: The most powerful piece in the game. It can move any number of spaces in any direction.

Knight: Moves irregularly, in an "L" shape. The knight moves 1 space in one direction, and 2 spaces in a perpendicular direction to the previous one. The knight has a special property of being able to jump over pieces, meaning it can move even when a piece is blocking its path.

Rook: Moves horizontally or vertically any number of spaces.

Bishop: Moves diagonally in any direction any number of spaces. This means it can only move onto spaces of its own color.

Pawn: The most common piece in the game, it protects the other pieces behind it. The pawn can only move 1 space forward, although there are exceptions to this. If a pawn has not moved yet, it can move 2 spaces forward. Pawns cannot capture a piece directly in front of it, but can capture pieces diagonally above it.

Capture: When a player's piece lands on the square its opponent's piece is occupying, the piece is captured. The captured piece is taken out of the game, and the piece the player used to capture occupies the square instead.

Check: When a player's pieces can directly attack their opponent's king within the next turn. If a player's king is in check, on the next turn they must either move their king or use a piece to block the check.

Checkmate: When a player has no legal moves they can do to get their king out of check. The player which initiated the checkmate wins the game.

Stalemate: When a player has no legal moves they can do, but their king is not in check. The outcome is a draw.

Draw: When neither player wins. This can be a result of a stalemate, neither player capturing any pieces or moving their pawns for fifty turns, playing the same moves three times, neither player being able to checkmate their opponent, or an agreement to draw.

Castling: Castling is a move which can be performed once in a game. The king and rook which will be used for castling cannot have been moved prior to the castle, and all of the spaces between the king and rook must be empty. If an opponent is threatening a square which is in the castle, the king cannot castle.

En Passant: En Passant is a move which can be performed when a player moves a pawn 2 spaces forward on its first move, and it lands next to an opponent's pawn. The opponent's pawn can then move diagonally forward to capture the pawn.

Pawn Promotion: Pawn promotion occurs when a pawn of a player reaches the end of the board (on the opponent's side). The pawn can then choose to become any piece (except for a king or a pawn). In EpicMafia, pawns always become queens.

LeChuckMay 22, 2020
+4
Note that the game which EpicMafia calls "chess" isn't actually chess as a few rules are missing. For example you can't underpromote and the game doesn't result in a draw after 50 turns of nothing relevant happening.

4thNightFacinorousMay 22, 2020!
Petition to rename the game to Ches.