Lucid has once again returned to us, and subsequently has brought a bunch of new roles into play. Many people have ideas for roles they think should get added, but only a few are going to ever make it into the game officially. This is a guide to making new, interesting, and unique roles that will benefit the game.

To start, let's look at some existing roles and see what makes them good. The Villager

Roles get interesting with the idea of power roles, which are roles with night actions. These are also the most suggested kinds of roles. The most famous of these are the Cop

. In almost any version of mafia, you will always find a version of these two roles. The town has two objectives in a game: to find the mafia and to stay alive. The Cop

do these things by each specializing in one thing. The Cop

is very good at finding the mafia. The Doctor

is good at keeping people alive. Simple roles like these are very good to have because they do one thing well and contribute to their side's win objective. A good mafia power role is the Hooker

. She stops the biggest problem for the mafia, which is town power roles. This brings me to the suggestions for making good roles:

The most complicated role on the site is arguably the Clockmaker

. If your role has more rules to it than the Clockmaker

, there is probably too much going on there. The best and most used roles do only one thing, and they do it well.

was just a role that could eat someone at night and become immune the next day, it would be ridiculous. By imposing the restriction on it that it must correctly guess the role of the person, it makes the Werewolf

a high risk and high reward role. Additionally, it is a third party role and doesn't have anyone to help him. Another example is the Bodyguard

. He risks his life for the chance to kill another killing role. If your role could completely shut down the other side, you should rethink it into making it either: less powerful, powerful but with a restriction, or a third party role. A good way to limit a powerful role is to only let them use their ability once.

If your role can be crafted using the custom role maker's logic, it's probably unnecessary. 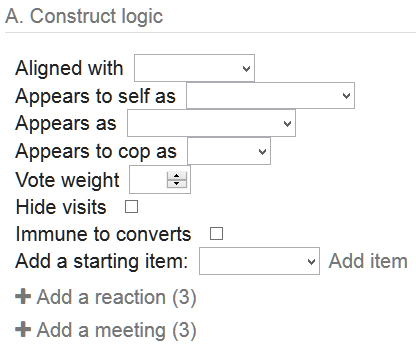 These roles end up being a stack of existing effects, which usually leads it to being too powerful. If your role is just a villager with a gun and a vest, there's no reason to add it officially. If you really think it should still be a role, buy it with tokens.

Not all mafia roles need a town version, and vice versa. Additionally, if your role accomplishes the same thing as another role, but with minor variation, really think if it is unique enough. For example, the Cop

, and the Lazy Cop

all receive similar information, but the way they receive it makes a big impact on gameplay.

The most popular way to play mafia in sandbox is obviously with closed roles. Since many of the suggestions are coming from sandbox players, many of them are roles that would almost exclusively be played in sandbox. This usually means the roles have random or absurd effects. A good example of a "sandbox role" is the Clown

What kind of setup would your role work best in? Can you make a theoretical setup that would be fair for both sides that includes your role? If not, consider the classic mafia setup of 3 Villagers

. For example, if your role is an investigative role, can you replace the Cop

in this setup and have it still be fair for both sides? If your role would only be good in a closed roles setup or a private game (i.e. where people will use the role's effect for roleplaying purposes), rethink it. If your role is a foil to a specific role, consider if the role you are attempting to counter is played enough to warrant something like this (and example being the Miller

You do not need to add features to a role simply because it would be in character. Simply because a role seems like it should have a gun, knife, or vest does not mean it should start with one. Balance comes before something like this. If you are really bothered by this, consider renaming the role instead.

Following these steps will help you to understand what makes a mafia role good and how to make a role that will have a higher chance of being official.

How does your role affect the game? Sometimes, it's not as obvious as surface level. For instance, a Miller

think more about the guilty reports he receives. A role like the Werewolf

, however, has a secondary effect. It makes people be very careful about hardclaiming a role, for fear of being eaten. An example of a role that does not really have an extra effect on how the game is played is the Party Host

. Ideally, your role should make the players of the game have to consider something new while playing. In other words, don't make it too disregardable.

I'm hitting the word limit here, so I'll be brief. Try to convey what the role does through the name. This is the step that should come last. Theme the name around the effect, not vice versa.

tigermomJul 13, 2020
This may sound like one of those if you have to ask you already know the answer questions but is there a way to code new roles? Or is that something only lucid can do?

filkoJul 13, 2020
+1
You can add rudimentary role logic to your custom roles, but it's very limited (can't give items like knives, snowballs, detonators, keys, etc..). Most custom roles would need Lucid's intervention to be properly added to the game.

Every thread needs a poll. What's the most important tip to consider when making a role?