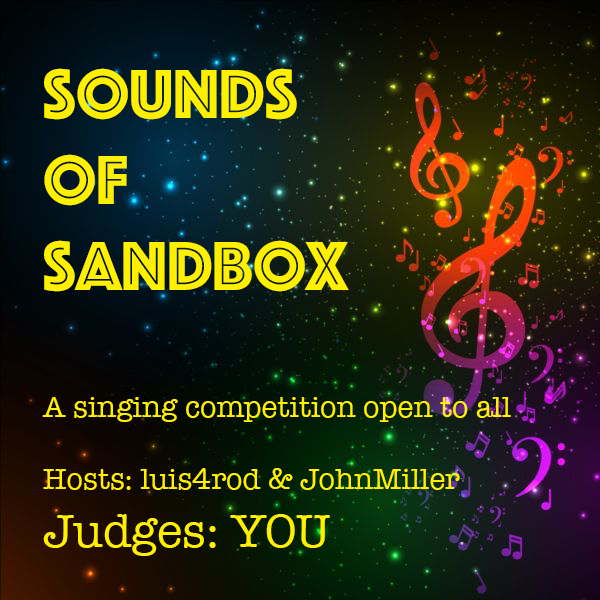 Did you enjoy Time to Shine and EM Idol? Well, here's a brand new singing competition with a twist: this time, YOU are on our panel of judges.

In this contest, players will sing their way through five themed rounds, earning points for performing well and for giving feedback to their fellow competitors. At the end of the season, 12 outstanding tracks from throughout the season will be selected for inclusion on the "Soundtrack of Sandbox” compilation mixtape showcasing the absolute best of our community.

The comp will be five rounds long. Each round will take approximately two weeks.

Missed the pregame? No big deal. Players in Sounds of Sandbox can jump into the competition in any of the five rounds of competition. Don't normally hang in Sandbox? Now's your chance to make an impression.

Feel like a theme isn't letting you show your stuff? Submit a wildcard entry! Twice in a game, a player may submit a second entry in any genre of the player's choice. Perfect for those trickier rounds, or for when you want to REALLY show off.

A Brand-new Judging and Feedback System

In Sounds of Sandbox, YOU are the judge. YOU are giving that sweet, glorious feedback that your co-competitors so crave. And YOU help determine the winners.

Players earn points not only for submitting entries and winning rounds--they also earn points for giving each other feedback.

At the end of the game the three players with the most points win the right to curate the SOUNDTRACK OF SANDBOX.

The Soundtrack of Sandbox

At the end of the game, 12 entries from throughout the season will be selected. These 12 tracks will be immortalized in Sandbox history with praise and eternal glory. Will YOUR track make the cut?