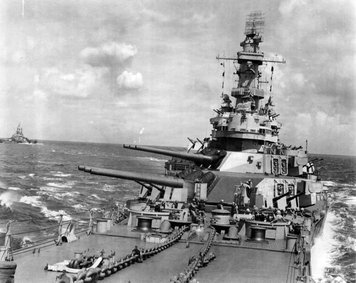 Yesterday, December 7, 1941 - a date which will live in infamy - the United States of America was suddenly and deliberately attacked by the naval and air forces of the Empire of Japan.

The objective of battleships is simple: through a process of trial and error shots, locate and sink your enemies ships.

Battleship: The titular ship of the game, despite this, it's only the second largest ship in the game after the carrier and occupies four grid squares.

A ship which occupies three squares.

You get two of these, and they both occupy two squares.

Similar to the destroyer in that it occupies three squares.

The game begins with the placement phase, during which the player places down their ships, one battleship, one carrier, one destroyer, two patrol boats, and a submarine. The player can place them on any part of the grid by clicking the ship and then clicking the grid, as long another one of their ships isn't presently at that location. They can also place the ship either horizontally or vertically using the rotate button after clicking the ship but before actually placing it on the grid.

After both players have completed the placement phase, both players will suddenly be presented with two grids:

the one on the left is the targeting grid. When it's the player's turn clicking on any square of the grid that isn't currently green or red will fire at that location. 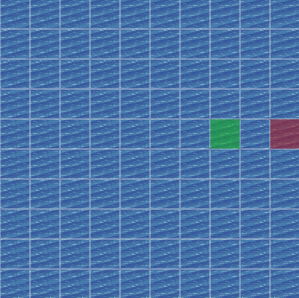 A hit is signified by a red square, green signifies a miss. The right grid shows the placement of your own ships and any shots taken by your opponent. 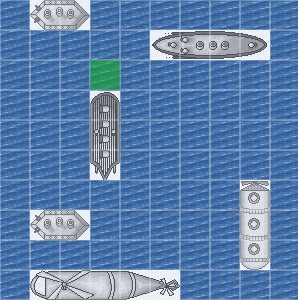 Players will each take one shot per turn, attempting to sink their opponents ships by striking every square the ship occupies. This will continue until one player has no ships remaining, at which point the surviving player is the winner.

First and foremost is placement. Generally there's two modes of thought here. One is to place your ships sparsely but unpredictably. Human brains look for patterns pretty much automatically so it's ideal to make sure your placement isn't too regular. At the same time you generally want to spread your ships out to avoid enemy fire concentrated in a small region from hitting them.

That being said, sometimes it pays to do the exact opposite, since your enemy will expect your ships to be spread out, it sometimes can be beneficial to pack them close together, hiding your ships in the others shadows.

In terms of firing strategy most people employ a fairly random one, but it helps if you think of the grid in terms of a chequerboard: 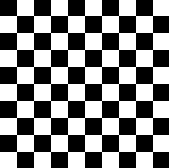 Now target only the black squares while hunting for ships. How is this beneficial? Well since every ship occupies a minimum of two squares, you're guaranteed to strike every ship this way. Obviously if you hit one you begin to fire at the nearby squares as well to finish sinking it, but doing this eliminates half the squares from your firing pattern.

Also paying attention to your opponents placement in past games can be beneficial, as people do tend to have some bias in their placement strategies.

Other strategies include firing in a spiral pattern out from the centre, though this isn't necessarily any better than firing at random "black" squares on the above mentioned chequerboard. More advanced strategies exist but generally require computer assistance and are beyond the scope of this guide.

gistofeverythingJul 1, 2014
All the images broke when html got rekt can someone pls remake with correct formatting qq

Also tomarkdown is hella useful for the lazy.