If remaining civ and maf die together, in this case via detonator, town wins.

But if the civ is replaced with a President... town and maf BOTH WIN? 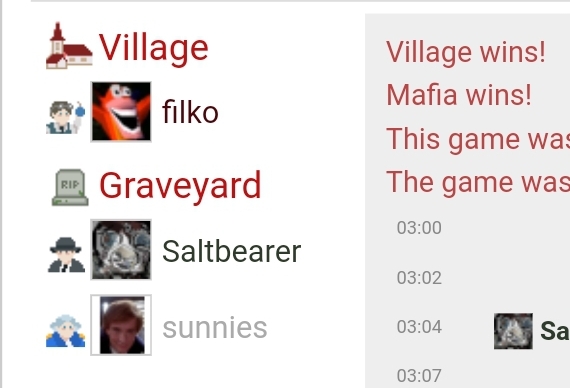 Obviously, the outcomes should be the same, and allowing Village and Mafia to win together is broken.

Meteor could be seen as precedent for considering a game lost by everyone if no alignment comes out above another.

Buuuuut, thinking about setups I want to create, it might make for better town play to grant mafia exclusive wins in both of these cases, for fulfilling their special win conditions. The priority targets wound up dead, and it's safe to assume that any setup featuring them is based around the idea of keeping them alive to the end/hunting them down. Not sure I like how strong Demo is against a maf who's gotten as far as identifying what should be the winning move, especially if a rig has only blocked it by chance.

BUUUUUT village has also gotten rid of the mafia, which is kindaaa the backbone of the entire game. Maybe in the case of acting at night being a death sentence either way, it was the mafia's job to prioritize stopping the demo to prevent that situation. Maybe setups just have to be designed around a universal constant of town winning when they run out of Mafiosos and Dad has to run to the store to pick up another box before the young'uns become obstreperous.

whadda y'all make of it

Who should come out on top?