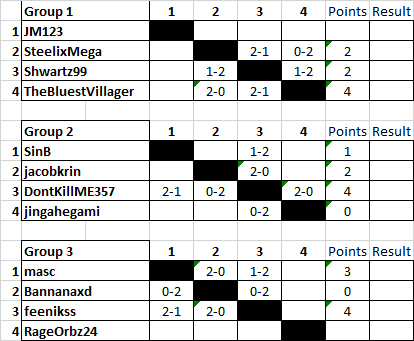 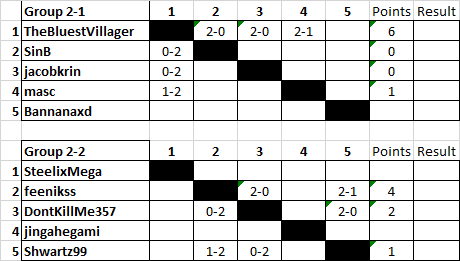 PM me your application. Participant count is unlimited

What are the prizes?

Structure of the tournament?

1v1 battles. Players will be divided into groups of 4 or 5 (depends on amount of participants). They then have to play each other in the group until 2 victories. Each win is a point, so even if you lose 2:1 you get 1 point. best 2 or 3 (depends on amount of participants) players of the group advance to next stage where players will be divided into groups again until only 2 players are left. Final game will be 1 round battle. If there is a tie at any stage of the tournament, i will host the tiebreaker game, which will be a 1 round battle.

How do we play?

Contact your opponents in the group and play 1v1 battles. Screenshot the results and send to me. You can also just send me the results without screenshot, but be aware that if there is a misunderstanding or disagreement, screenshots will be taken into account and lack of them will force you to replay the games.

Does this even work and is it fun?

previously hosted tournament : https://epicmafia.com/topic/71736 if you want feedback, ask the players that took part in it

When does this start?

Send in applications until 8th of December 1 PM GMT (Greenwich Mean Time). Shortly after i will post groups and tournament will start on 8th of December 2 PM GMT. Several days (depends on participant count) will be given to complete your games in each stage. Late applications will be accepted until 1st Stage is completed (possibly).

if there are more questions, PM me

theturningRAYDec 22, 2018
wait can i join shoot i cant believe i didnt know about this two weeks ago

TheBluestVillagerDec 22, 2018
Hey NeverMaf, any idea how long this round will last?

TheBluestVillagerDec 25, 2018
Saying this to keep the thread on the games tab

TheBluestVillagerJan 3, 2019
Any updates on this rounds closing?

NeverMafJan 4, 2019
sadly but undeniably the tournament has died. i will try to contact everyone during the weekend to figure out how to continue

Shwartz99Jan 6, 2019
i got one point and am tied for 4th place with masc, i believe this means i get a sticker of my choice

TheBluestVillagerJan 7, 2019
Shawtz99 you and masc are in different groups, and you have two people above you in your group. Unless i'm wrong, that would make me first, feeniks second, dontkillme in third, and masc fourth.

TheBluestVillagerFeb 1, 2019
honestly i'm bumping this and asking for a response @NeverMaf

TheBluestVillagerJul 27, 2019
hey can i have my coins now thnx