thinking about the em ui87

just was thinking about the EM interface. really I have no problems with the core of it, a text box and vote checker is all the game really needs to work. but i think it's a large problem for newer players etc. like notice how noavis always veg so i was thinking about how it can be improved.

in my perfect scenario parts of the UI would be modular so if you played BGO you would know that aspects of the game like (chat, inventory, player list, and main game window) can be resized at will depending on what the player wants. i'll expand on this idea in other examples but you'll see what I mean. 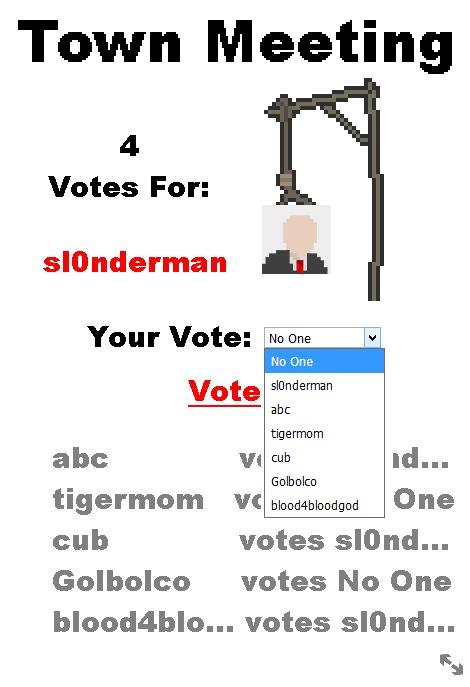 so there's some things to note about this. so you'll notice the graphic and i think having pretty pictures is a good step forward in making the game easier to understand. my idea is that the person who is currently majority voted gets their name and avatar put up on the noose. this idea comes from emjack of course which places vote count next to the name on the vote list.

next comes the players vote. on their screen it will ALWAYS be the top box instead of a random place on the voting list. then of course comes the rest of the votes (yes i realize they don't perfect match up with the number). if you'll notice i chose some longer names here on purpose. if one wished too, they could expand the box and get rid of the ellipses.

cuteJan 17, 2018
ye but can't u not see ur role in uhhh that certain setup type that sandbox uses? since it's random it's impossible to hover the little icons and get the role descriptions. unless.... u have been able to this whole time and i didn't know

sl0ndermanJan 17, 2018
hi yes this threads is about improvements i would make to the interface which would do just that

trapJan 17, 2018
+1
yeah in regular setups you can just mouseover but in the sandbox setup you can't. and only a few roles have the question mark in the meetings

sl0ndermanJan 17, 2018!
+2
ok lets smush everything together
so the first thing you might notice is that i'm at 140% zoom which is the minimum to display everything at once normally without scrolling so i decided to try and fit everything into that space as a general guide ok so in databases you have something called primary keys which is the point of data to which other data is related. if you look at the game you see that the primary key is the name of the user (more accurately the user id number). to each username is linked: an avatar, a role, and a vote. so why is the name repeated when all 3 of these things could be displayed in one column.

i think this works really well like now names aren't listed twice (in a different order no less). i'm sure it was easier to make initially but i think it really polishes down to this form .

sl0ndermanJan 17, 2018
like not to pat my own back here but the player list even separates the alive and dead people so obviously people in the top section get a vote and the people in the gy at the bottom don't. it works super well idk if it's been pointed out before

sl0ndermanJan 18, 2018!
ok so just now i went into an old game so i could make this side by side comparison. this is like an example of what the game would look like at the same moment as the existing game so i moved some things around what you might notice is that items are on the left instead of the right, a BIG RADICAL change that veteran em players might have to adapt to much like the icon changes ;)but the idea of this design is that left: everything personal and right: meetings and such

i'm really liking this personally what do you think so a few things about this. first i added the number of players to the title. i figure this is really a cosmetic thing who needs to know exactly but it fits fine. secondly i added a space for points to be shown for ranked games. third i removed the mafia table it just takes up too much room to work i think. just a list of players and names could work. under the meeting mafia list would be the non meeting mafia list but there are none in t his game.

sl0ndermanJan 18, 2018
another thing to note that im not yet confident on is that instead of a vote called like "hooker meeting" it just said "choose who to use your action on" which is very nice and general and not confusing because you have a nice big role card staring you in the face. heres an example of a 2 part night action.

having them positioned like this really lets you know the direction of the action. i think driver is very unclear to someone who doesn't know how the game works.

sl0ndermanJan 18, 2018
+1
so i like many players think graphical mode is useless in its current state. there is very little point in moving your little avatar around the screen in a game where all the interaction is text based. that doesn't mean it has to go to waste though. while we don't need graphical mode itself, adding graphics could add some (much needed) flavor to the game. deletedJan 18, 2018
I didn't read anything in this thread but posting to tell you that you have my unconditional support.

sl0ndermanJan 18, 2018
so a header like this i realized actually ruins troll setups because you actually get a preview of the roles in the game instead of getting tricked into thinking you're playing the classic sandbox closed roles crap

sl0ndermanJan 18, 2018
+1
you ever like do your night action and then you tab out but your target suicides so you veg so ROUGHLY karma is a gauge about how likeable a user is. so what if you want to mark down that you want to avoid a user? i don't think a thumbs down is a good idea (it gets too close to bullying if something like -karma appears on the profile stats) but what if there was a client only thumbs down? so you click this button on a user box and you consider them "avoid"
so when they join a game with you or you join a game with them you get the message "A user you want to avoid is in this game." now this probably could be done with a simple user script but here's how it can tie into the site as a whole. say someone gets a violation for lobby camping (when you join a user's game specifically to bother time over and over). when this happens bother users can AUTOMATICALLY get an avoid warning when they are in a game together. but honestly wouldn't you want a notification when {user you hate here} joined your game? much less harsh than an autokick script if you ask me

sl0ndermanJan 18, 2018
this is starting to touch on outside of game site issues and i'm probably going to branch out into that i'm starting finish up my ideas on the game interface itself i want to talk about lobbies at some point

the part of the interface that sucks the most is