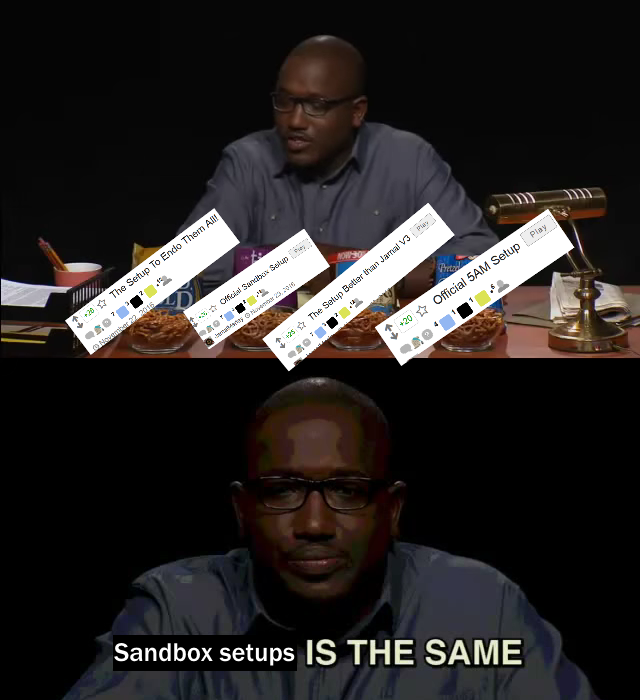 It's really sad that main has better setup diversity. Sure they may play Fancy Pants too much, but at least their competitive setups rotate and new things are coming into play every now and again. When I was testing out some new setups with the Role Patrol group, we were overlooked in sandbox but games filled in minutes in Main.

Closed roles didn't always exist. It was suggested back in 2011. When I joined in 2012, sandbox still wasn't completely dominated with closed roles games. Sandbox was just the lobby you could play for fun, instead of the serious attitude in Training or Competitive (for you newbies, training became Main lobby and the dedicated competitive lobby died off). When I started playing and I was my turn to host, I would hand make a setup each time, trying to put a little balance in it as I went. Maybe the Sandbox Setup is so popular out of laziness. It's right there, stickied, and ready to go and you know people will join it at this point so might as well, right?

Did you know there are over 1,200,000 setups saved? Sure most of them will be crap and duplicates, but even out of half of them Sandbox will be playing the same old closed roles one (with the occasional update with new roles, of course).

This is the part of the post when I do a counter point. "But sl0nderman," you are saying to yourself, "the beauty of closed roles is that you get a semi-unique setup each time you host!" Well this is where Sandbox gets part of it's reputation of "not trying." Yes, part of that is the lack of rules, but the other part is that there is less strategy in a closed roles setup than in normal ones. There's little to no way of knowing what roles are in play for the average player in the Sandbox Setup, which in turn causes people to not think about actions as much. Say you went to gun you friend but they were actually a granny and you died. Say everyone just automatically NL'd on the first day but there was an interrogator in play and he just killed the doctor. You can't fault the players for this, there's no way to play around literally every role in the game.

Maybe I've been around too long (which is silly because I've not even close to one of the oldest users on the site), but don't you get bored, Sandbox? Obviously there are those of you who are so done with games that you've complete given up and just sit around in the chat.

I invite everyone who is willing to play games to do a very simple thing. Host a different setup and try something new. There are literally a million to choose from. You'll probably start having more fun that you realize.

EDIT: SHUFFLING THE NUMBER OF PLAYERS AROUND IS FAKE DIVERSITY

moonlightsealFeb 9, 2018!
The problems with open setups are people wont join it if it has the numbers of players that game / numbers of roles < 2


Secondly, mostly only the host know how to play open role setup well and most of the times host doesnt give any like guides or basic strategy to other people

Thirdly, the change from open role to closed role is an improvement, and look at the poll, no one complains about the closed roles, so changing back is unnecessary

sl0ndermanAug 28, 2019
I'm not sure if people avoid games because I'm the one hosting them. I'm sure that's a small part of it but the boring repetitive nature of these sandbox games is greater than ever. I've taken to trying to host must lynch setups and that helps a little bit to curb the plague of inactivity that tends to happen after the first day. I think it's impossible for mafia to lose a sandbox game anymore unless, of course, they are even more inactive than the town that no lynches day after day and all the killing roles veg (which I cannot believe happens).

sl0ndermanAug 28, 2019
I think it's a symptom of the chatbox being hidden that people want EM games to function as chatbox but even then after pregame one person dies and then sudden its a ghost town with zombies hitting no lynch. i think hiding the chatbox was one of the worse decisions lucid made but i also think the lobby needs some rearranging not like that crap Peco was always pushing but EM is stuck in an outdated design.

also i really hate that no one tries anymore. like i know people didn't try too hard to begin with but anytime i say anything somewhat logical having to do with gameplay i'm laughed out of the lobby because "lol its sandbox"

NimauAug 28, 2019
As a personal example, it's not that I don't want to play a different setup, it's that I'm so tired of people suiing or just ignoring the setup if it's anything other than what they know. Shayne tried hosting different setups a lot too but people just seemed to give even less of a shit than normal. So at a certain point it's like, why bother unless I know most of the players in the game and know they AREN'T going to do that?

SirAmelioAug 28, 2019!
yepp that happens so often and its personally what got me to play even less than i was already playing


what i have often said years ago (and got laughed at too) is there should be some kind of "comp" closed roles, even if not for a trophy or whatever. That way people who want to go just to chill and meme at games they can just go to unranked and those who want to have "relaxed but still mafia" games (WHICH BTW THAT IS WHAT SANDBOX IS SUPPOSED TO BE) can join the comp ones.

aquariusAug 28, 2019
^^ and i think that goes back to the chatbox being somewhat inaccessible now. i know i used to be a chatbox warrior a long time ago because i didn't join games if i just wanted to talk to other people. when i joined games i actually engaged in the gameplay and didn't meme around too much

but now that the chatbox is hidden and no one uses it, people just use the games to talk rather than play because that's the only option that will get people's attention.

and few people want to go to main because hardly anyone plays unranked there.

i think the vivor standard of making as big a game as possible is a good alternative to a lack of chatbox, i'd like to see more people making those kinds of games if they just want to talk rather than hosting a 12p and not actually playing the game (you can't really carry a conversation well between the nights and days anyway)

The worst thing about sandbox games is...

I pledge to do my part and bring a little damn variety into sandbox.
24 signed